The whip the Roman soldiers use on Jesus has small iron balls and sharp pieces of sheep bones tied to it. Jesus is stripped of his clothing, and his hands are tied to an upright post. His back, buttocks, and legs are whipped either by one soldier or by two who alternate positions. The soldiers taunt their victim. As they repeatedly strike Jesus’ back with full force, the iron balls cause deep contusions, and the sheep bones cut into the skin and tissues. As the whipping continues, the lacerations tear into the underlying skeletal muscles and produce quivering ribbons of bleeding flesh. Pain and blood loss set the stage for circulatory shock. 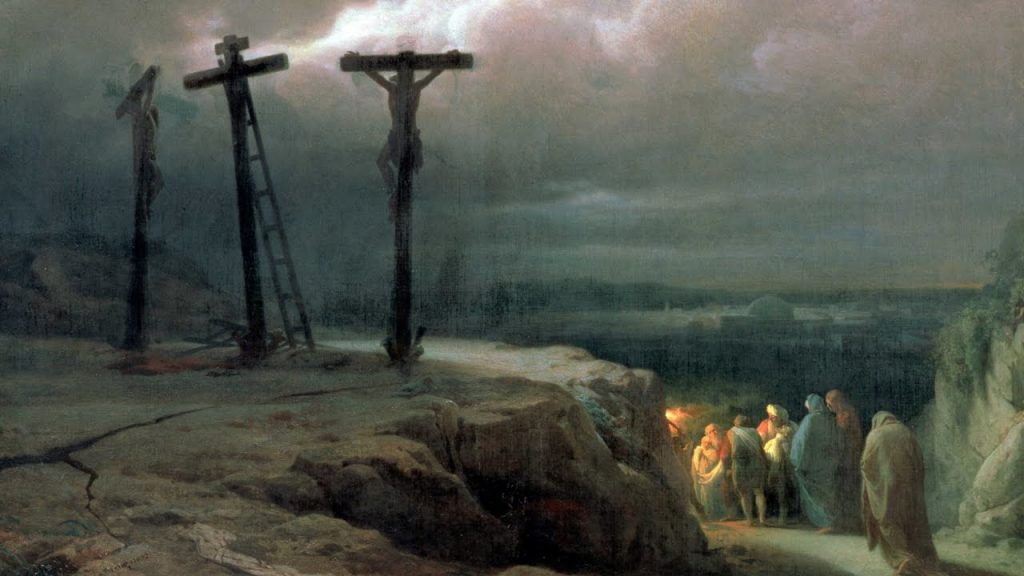 When it is determined by the centurion in charge that Jesus is near death, the beating is finally stopped. The half-fainting Jesus is then untied and allowed to slump to the stone pavement, wet with his own blood. The Roman soldiers see a great joke in this provincial Jew claiming to be a king. They throw a robe across his shoulders and place a stick in his hand for a scepter. They still need a crown to make their travesty complete. A small bundle of flexible branches covered with long thorns are plaited into the shape of a crown, and this is pressed into his scalp. Again there is copious bleeding (the scalp being one of the most vascular areas of the body). After mocking him and striking him across the face, the soldiers take the stick from his hand and strike him across the head, driving the thorns deeper into his scalp.

Finally, when they tire of their sadistic sport, the robe is torn from his back. The robe had already become adherent to the clots of blood and serum in the wounds, and its removal—just as in the careless removal of a surgical bandage—causes excruciating pain, almost as though he were being whipped again. The wounds again begin to bleed. In deference to Jewish custom, the Romans return his garments. The heavy horizontal beam of the cross is tied across his shoulders, and the procession of the condemned Christ, two thieves, and the execution party walk along the Via Dolorosa. In spite of his efforts to walk erect, the weight of the heavy wooden beam, together with the shock produced by copious blood loss,

is too much. He stumbles and falls. The rough wood of the beam gouges into the lacerated skin and muscles of the shoulders. He tries to rise, but human muscles have been pushed beyond their endurance. The centurion, anxious to get on with the crucifixion, selects a stalwart North African onlooker, Simon of Cyrene, to carry the cross. Jesus follows, still bleeding and sweating the cold, clammy sweat of shock.

The 650-yard journey from the fortress Antonia to Golgotha is finally completed. Jesus is again stripped of his clothes except for a loin cloth which is allowed the Jews. The crucifixion begins. Jesus is offered wine mixed with myrrh, a mild pain-killing mixture. He refuses to drink. Simon is ordered to place the cross beam on the ground, and Jesus is quickly thrown backward with his shoulders against the wood. The legionnaire feels for the depression at the front of the wrist. He drives a heavy, square, wrought-iron nail through the wrist and deep into the wood. Quickly, he moves to the other side and repeats the action, being careful not to pull the arms too tight, but to allow some flexibility and movement. The beam is then lifted, and the title reading “Jesus of Nazareth, King of the Jews” is nailed in place.

The victim Jesus is now crucified. As he slowly sags down with more weight on the nails in the wrists, excruciating, fiery pain shoots along the fingers and up the arms to explode in the brain—the nails in the wrists are putting pressure on the median nerves. As he pushes himself upward to avoid this stretching torment, he places his full weight on the nail through his feet. Again, there is the searing agony of the nail tear- ing through the nerves between the metatarsal bones of the feet. At this point, another phenomenon occurs. As the arms fatigue, great waves of cramps sweep over the muscles, knotting them in deep, relentless, throbbing pain. With these cramps comes the inability to push himself upward. Hanging by his arms, the pectoral muscles are paralyzed, and the intercostal muscles are unable to act. Air can be drawn into the lungs but it cannot be exhaled. Jesus fights to raise himself in order to get even one short breath. Finally, carbon dioxide builds up in the lungs and in the bloodstream, and the cramps partially subside. Spasmodically, he is able to push himself upward to exhale and bring in the life-giving oxygen. It is undoubtedly during these periods that he utters the seven short sentences that are recorded.

Now begin hours of this limitless pain, cycles of cramping and twisting, partial asphyxiation, searing pain as tissue is torn from his lacerated back as he moves up and down against the rough timber. Then another agony begins. A deep, crushing pain in the chest as the pericardium slowly fills with serum and begins to compress the heart. It is now almost over— the loss of tissue fluids has reached a critical level; the compressed heart is struggling to pump heavy, thick, sluggish blood into the tissues; the tortured lungs are making a frantic effort to gasp in small gulps of air. The markedly dehydrated tissues send their flood of stimuli to the brain. His mission of atonement has been completed. Finally he can allow his body to die. With one last surge of strength, he once again presses his torn feet against the nail, straightens his legs, takes a deeper breath, and utters his seventh and last cry: “Father, into your hands I commit my spirit.”