What Was Really Ever Real? Oh Well, It Doesn’t Matter Now.

There are three deaths. The first is when the body ceases to function. The second is when the body is consigned to the grave. The third is that moment, sometime in the future, when your name is spoken for the last time.

Philosophers have long wrestled with the question of whether or how it is possible to really know external reality. We sentient creatures are utterly dependent on our subjective perceptions and are trapped within our minds—within our brains.

On the other hand, we find our subjective perceptions arrestingly compelling, not appreciating how highly unreliable they can be. It can be very hard to convince people that their experiences are ‘in here,’ not ‘out there.’

Don’t believe everything you think

As a psychiatrist, I routinely hear about all sorts of unusual perceptual experiences, and not just from people who are psychotic. A wide variety of abnormal conditions as well as a great many normal but misinterpreted phenomena can cause distorted perceptions.

And yet we find our own subjective perceptions so persuasive that we are more willing to doubt the laws of physics than to doubt our own minds. We can’t help assuming that perception equals reality. People underestimate the capacity of our brains to create their own convincing realities. They underestimate how powerfully realistic some dissociative experiences, hallucinations, and other well-recognized mental/neural misperceptions can seem.

You could say that one major role of a psychiatrist is to persuade people to be skeptical about their own beliefs—that is, to critically examine the evidence for their assumptions and to not automatically believe their own thoughts and perceptions.

We experience the world through our senses. Even though it’s often unreliable, subjective perception is a crucial source of data about the world. Indeed, it is the source of our data about the world. Even when we practice science, we are still obtaining data through our senses. Science is just a method to minimize the distorting effects of our perceptions and intuitions and to approximate a more objective view of reality (as the philosopher Thomas Nagel put it: “the view from nowhere”).

Intuition is greatly valued these days. You are advised to “trust your gut.” To be sure, intuition is often helpful, having been honed by evolution and personal experience. Trained intuition, such as that acquired by a specialist in their professional field over years of experience, can be especially helpful, and is very often accurate. But it can also be completely off base and lead an expert astray, getting them locked into incorrect assumptions—this has happened to me many times as a psychiatrist, in my role as diagnostician and therapist trying to understand my patients, only to realize much later how misguided my intuitions were. We have to be aware that our intuitions and firmly held assumptions may be completely wrong.

Cold hard objective data must be the ultimate arbiter when evidence obtained through rigorous scientific methodology contradicts our intuitions.

The brain is a well-honed but imperfect virtual reality machine

You don’t have a brain. You are a brain.

Fortunately, our brains are very much embodied, and while it is true that the inputs from the body and its sense organs are like simulations, we can be fairly confident that most of the time they are faithful representations of the actual things out there. We can very reasonably expect that evolution has shaped those representations to be a pretty close match to the external world, because organisms that could not accurately and reliably perceive and respond to their environments would not have survived long and would have been less likely to leave descendants, eventually going extinct. We are descended from those animals that had relatively accurate perceptions.

But many things can distort or deceive a creature’s perceptions, and we are no exception. The brain is an energy-expensive organ, so it had to evolve energy-conserving efficiencies, relying on assumptions and approximations—best guesses. As a prediction machine, it must take shortcuts for pattern recognition as it processes the vast amounts of information received from the environment by its sense organ outgrowths. It also fills in gaps in its sensory input and smooths over ‘bumpiness’ in that input.

For example, our visual field appears to us as smooth, seamless, complete, and fully coloured, when in fact only a very small part of it is high-resolution. Our eyes make little involuntary darting movements as our brain scans a scene and builds up a mental, three-dimensional ‘map’ of the image. It smooths over the jumpiness from our eyes darting about. We are also completely unaware that we have two big blind spots, and we do not realize that our peripheral vision is smeared and colorless.

Likewise, memory is not the video-recording-like process some people assume it is. It is subject to many after-the-fact influences and ‘editing,’ and is highly susceptible to suggestion, as was painfully learned in the “recovered memories”/false memory fiasco of the 1990s.

Optical illusions are one way of demonstrating how our brains can be deceived. Furthermore, we are more likely to misperceive things when we are tired or hungry, or when our senses are impaired by reduced sensory input (e.g. dim light). Intoxicants and hallucinogens cause distortions and dramatic misperceptions. And mental illnesses can greatly distort or bias our perceptions of reality. Even normal anxiety and sadness, and other ordinary emotions, can bias our perceptions.

Consciousness and the ‘Self’ Illusion

Neuroscience tells us that the self is an elaborate illusion. Undeniably, subjective experience is real; it is just not what it seems. The self is not a unified ‘thing.’ Rather, the brain is actually a confederation of independent modules working together.

The vastly complex unconscious neuronal determinants that give rise to our choices and actions are unknowable to us. The brain conveniently constructs a simplified narrative of a unitary ‘self,’ the independent agent of all our thoughts and behaviors, as if there were a little ‘Mini Me’ sitting somewhere behind our eyes, piloting the whole apparatus.

Evolution likely shaped our brains this way because this illusion is highly adaptive in promoting functioning—it works.

Consciousness itself probably evolved as a way for organisms to go far beyond responding merely reflexively to stimuli—to be able to respond more flexibly, and in a more delayed and planned manner. (A key function of consciousness is probably to allow non-reflexive behavior such as responding after a delay, or executing an action based on internally generated plans7). 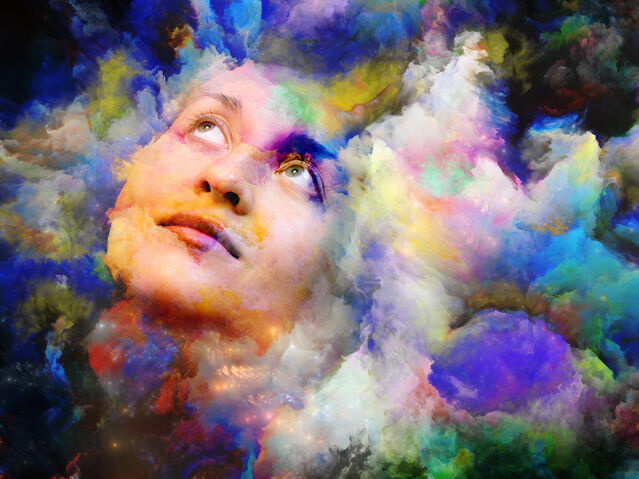 We are so impressed by the subjective experiences our brains produce that even when people intentionally take hallucinogens to induce fantastical hallucinatory or dissociative experiences, they are still often inclined to believe they have discovered some kind of transcendent reality rather than merely chemically altered their brain’s perceptual circuitry.

Award-winning science journalist and spiritual seeker John Horgan authored a book called Rational Mysticism, suggesting that mysticism can be a rational route to uncover the mysteries of existence. In one of his Scientific American articles, he writes “My own mystical intuitions keep me from ruling out the possibility of supernatural creation.” In another article, he writes about a ‘bad trip’ he experienced decades earlier on a powerful psychedelic of unknown type, contrasting that experience to the mystical experience of a doctor who credulously claims he went to Heaven and back during an episode of coma. Horgan ventures toward skepticism but stops short:

But another part of me is dissatisfied with this dismissal. My drug-induced visions possessed a mythical, archetypal quality that my dreams lack. The visions seemed not absurd and meaningless, like most of my dreams, but almost too meaningful. They seemed too artful—too laden with metaphorical and metaphysical significance—to be the products of my puny, personal brain. I felt as though I had left my individual mind behind and traveled into another, much more expansive realm.

Aside from psychedelic-induced mystical states like Horgan’s, mystical experiences can be caused by a great many other kinds of influences on the brain (as I have discussed previously), not least of which is the simple but extremely potent power of suggestion.

There is enormous value and validity to subjective ‘truths’ as a way of understanding the human condition and the world, in all its richness. So long as we do not lose sight of the fact that objective scientific evidence, gained by meticulous methods controlling for and neutralizing the distorting influences of perception and intuition, is the most effective arbiter in understanding the true nature of external reality. Of course, science itself is as fallible, biased and self-serving as the all-too-human scientists practicing it. Science is frequently wrong. But its spectacular progress is testament to the rigor of its methodology, the honing effect of incisive peer-review and experimental refutation, and the sheer power of such a relentlessly self-correcting process.

Art in all its forms, including literature, together with fantasy, myth and religion, all play a central role in exploring and expressing the inner emotional life of Homo sapiens. These routes to self-discovery and culture are life-affirming and life-enriching for most of us. They reveal subjective truths and realities. But they should not be mistaken for objective truth and reality.

In most premodern cultures, there were two recognized ways of thinking, speaking, and acquiring knowledge. The Greeks called them mythos and logos. . . . They were not in conflict but complementary. . . . Logos (“reason”) was the pragmatic mode of thought that enabled people to function effectively in the world. It had, therefore, to correspond accurately to external reality. . . . But it had its limitations: it could not assuage human grief or find ultimate meaning in life’s struggles. For that people turned to mythos or “myth” . . . it helped people to live effectively in our confusing world, though in a different way. Myths may have told stories about the gods, but they were really focused on the more elusive, puzzling, and tragic aspects of the human predicament that lay outside the remit of logos. Myth has been called a primitive form of psychology.

—Karen Armstrong, The Case for God